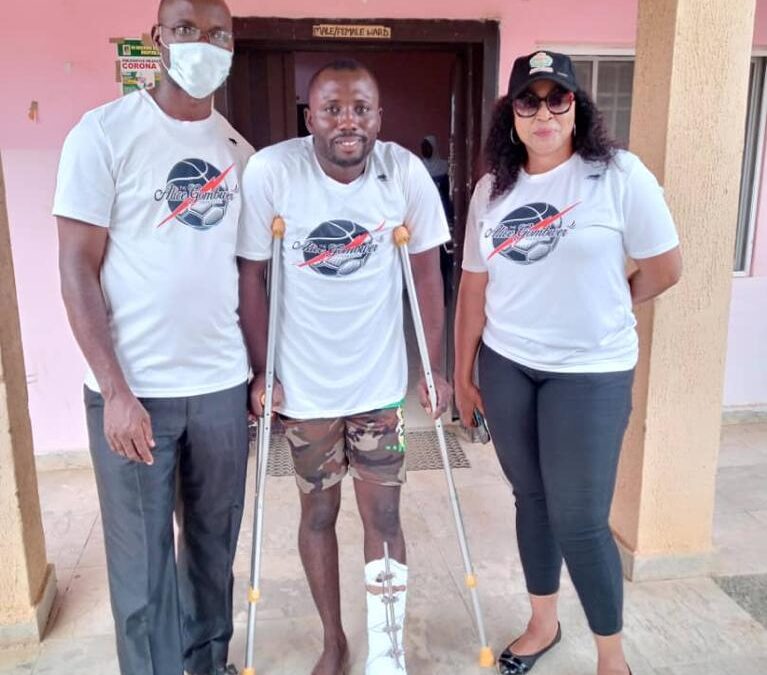 Accolades have continued to pour in for Alice Gombwer Foundation for coming to the aid of an accident victim, Ebenezer Fatunmbi whose leg was broken after being hit by a vehicle in Kaduna metropolis, requiring surgery at the cost of N250,000.
Fatunmbi’s friend,  Mr Darey Elishawho took it upon himself to raise funds for the needed surgery, praised the non governmental organization for rising up to the task.

“The money needed was #250,000 So we had to crowdfund on social media, which is where the Gombwer foundation came in contributed a lot to the success of everything that has been going on now in regards to his treatment and wellbeing,” he said.

Narrating how the incident took place, he said that his friend was crushed while trying to assist some stranded commutters.

“On the 10th day of April 2020 Ebenezer Fatunmbi popularly known as Ebenco, was heading towards Independence Way on his bike, which he passed towards Kaduna State University (KASU) on getting to KASU he saw some people who asked him to help them reduce their distance by dropping them towards a place where they can get vehicle or Keke to their destination.
“As he was about to park so he could pick them on his bike, a vehicle that was losing control rammed into him around that Traffic Junction beside Dialogue,” he  recalled.

Narrating further, he explained that the vehicle driver ran away and upon a heavy chase,  was apprehended around Janruwa Junction along Patrick Yakowa Way.

On how the foundation came to the rescue, he said the social media player a big role.

“When the video of his first treatment from the injuries he sustained played which was a broken leg got to us his friends, and with the times we were in, couple with the lockdown and no way to see or reach him, we had to communicate with the only person who was reachable at that point and  money was the challenge and it was needed to commence emergency treatment and surgery,

“We can’t thank the Gombwer Foundation enough. God bless you and the entire foundation,” he said in a message to the CEO of the foundation, Joseph Paul Gombwer.

On why didn’t the driver responsible for the accident foot the bill, he said they could not reach him as a result of the CoronaVirus pandemic lockdown in Kaduna State.

“As a result of  the lockdown and the restrictions of movement, we’ve not been able to see  the driver that knocked him down, we later learnt he was a pastor,” he said.

Adding that they later learnt he was involved in another accident while being  chased.