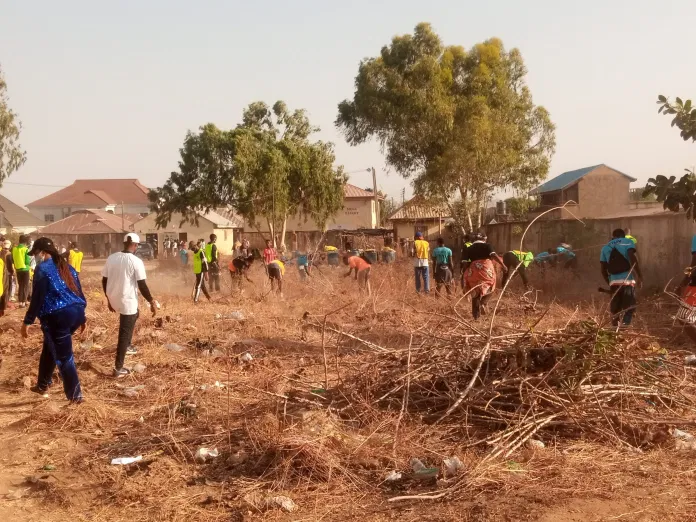 Participating teams for the 2021 edition of Annual Alice Gombwer Foundation Peace and Unity Cup will register for the competition, only when they engage in community service in their respective domains.

Board member of the foundation, Joseph Paul Gombwer disclosed this to our correspondent, when they were sighted clearing bushes and refuse at the Sabon Tasha General Hospital, Chikun Local Government Area of Kaduna metropolis on Wednesday January 27, 2021.

“We normally organise football competitions every year. So we said this year, instead of paying registration, teams should engage in community service in their communities.
“Danny B Football Academy is officially the first to register in 2021 as you can see they are here to clean up bushes and grasses at the Sabon Tasha General Hospital,” he said.

He further explained that Danny B Football Academy trains at YMCA Field Ungwan Boro, which is close to the hospital, which influenced their choice of where to conduct the community service.
On how many teams are expected to participate in this year’s edition, he said previous editions featured only 16 teams, but they have concluded plans to increase the number.

“We intend to.increase the.number of teams to 20 . For other editions, we did 16 teams. We intend starting the tournament a little bit earlier because of the number of teams. Normally we start in July but we are thinking of starting in June and ending in July.
“That is why we are starting this community service now so we can register the teams as they do theirs,” he added.
On how much teams paid for registration in other editions, he said they were only charged a token to support costs of logistics.
“Normally we charge each team N3,000 for registration. It is an NGO so we just charge that for some logistics, while we offset the rest,” he disclosed.

At the Sabon Tasha General Hospital on Wednesday, the Danny B Academy were seen clearing bushes and refuse, assisted by both male and female players of Gombwer Foundation Basketball Academy.
Our Correspodent observed that as at time of filing this report, bushes and refuse that posed health and security challenges in the facility were all cleared, giving it a new admirable look.